One of the nice benefits of web building is that my craft is easily tradable. My latest trade has resulted in one of the most beautiful material creations I have ever seen.

My new telemark skis are the compilation of local art, local design, and local manufacture.

A couple years ago,in one of my all-time favorite projects, I build a site of Bryce Widom in trade for my favorite painting of his, “The Samurai.” 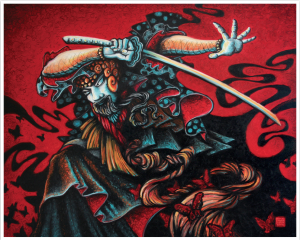 A while back, a Summit County Colorado company began making very high-performance telemark bindings out of billet aluminum. At the time, Bomber Bishop bindings were revolutionary in the telemark world. I picked up a beautiful pair of these back then. Unfortunately, they are no longer in production, but they are an engineering masterpiece.

Over a decade ago, in my ski bum days, I had a fellow bus driver named ScottyBob Carlson. In a crew where eccentricity was the norm, ScottyBob was a standout. Matching beard and Ponytail, pack of cigarettes a day, sour attitude towards tourists…ScottyBob was/is the consummate mountain man. Not a day went by that ScottyBob was not out on the mountain, carving perfect tele turns as if nothing else on earth mattered.

Scotty was always a bit different than most of the tele guys. He saw the benefits of the deep sidecut ski when all the K2’s we still board-straight. He also had the insight about asymmetrical edges that would later evolve into the “BobTail” patent that he has built a custom ski building business around.

I’ll be helping ScottyBob Skiworks with some website stuff and in trade, Scotty handcrafted me these beasts of the powder.

These skis are so pretty, I almost don’t want to even ski them, just let them hang on the wall in all their glory…almost. They are the product of the dedicated craftsmanship of Bryce, Bomber, and ScottyBob. What a great way to indulge a little materialism 🙂