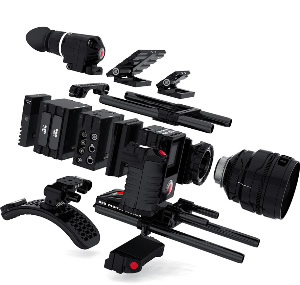 The Red: Scarlet DSMC(Digital Stills and Motion Camera) was released last week. It is a thing of epic beauty. I am not even a real video producer and don’t really have aspirations to be one, but I am totally geeked out by this system.

I see it as Agile Development in hardware form. “They don’t make em like they used to” does not apply here, or if it does, it turns the favorite aphorism of the Greatest Generation on its head.

The system is built around the concept of modularity. Every piece can be swapped, mixed, matched and upgraded. Darwin would be pleased, the camera has evolution built into its design.

This evolution has already been demonstrated in an amazing example of loyalty cultivation from Red. Early adopters of the 1st gen Red camera body over the last year would have been upset at the roll-out of the new, upgraded version. Red is rewarding its early adopters with a FULL trade-in value on their 1st gen bodies, for upgrade to the new ones. This is unheard of…and totally awesome! I would’ve gladly traded in my 1st gen iPhone for the 3G model but would’ve had to pay the “early adopter fee” of hundreds of dollars. Even Apple could learn from Red.

Yes, the system is expensive for the video hobbyist, but far cheaper than comparable cameras of this quality and well within the budget of even indie filmmakers.

Perhaps the Red team should take over Detroit in this bailout plan. It seems that if we shifted our material focus from quantity to quality and stressed modular evolution over seasonal replacement we might solve a lot of the worlds problems and waste a lot less time and effort in the process. Perhaps I am being overly optimistic but if Agile development works so much better for software, maybe it can take hardware to the next level as well.

I want all my tools to be modular, scalable and evolutionary.